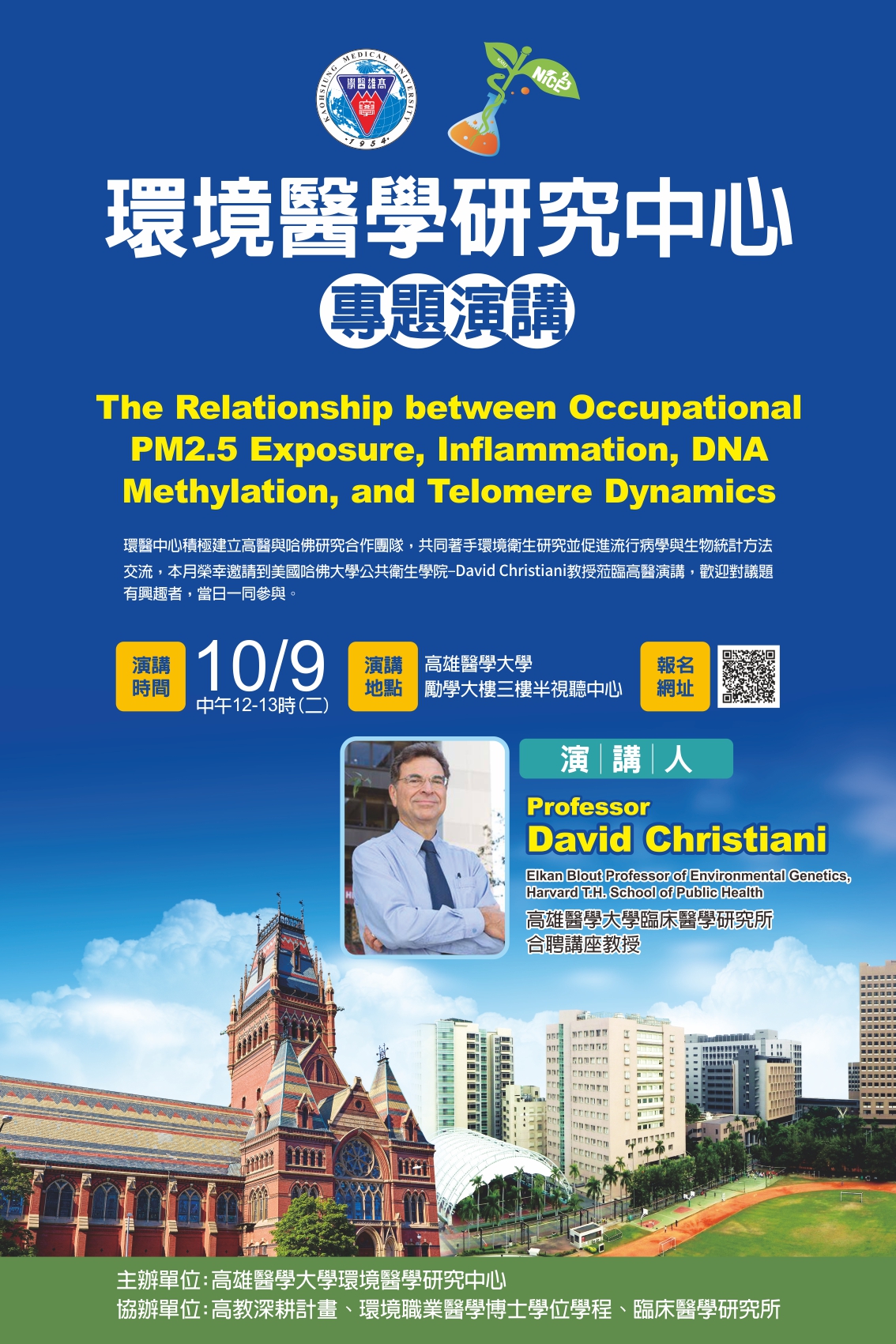 Dr. Christiani ‘s major research interests are occupational, environmental and molecular epidemiology. He has always enjoyed conducting occupational-health research on three continents: Asia, Africa, and North America. He has developed a wide network of collaboratives and contacts as they undertake new studies of the reproductive effects of exposure to chemicals (China), arsenic exposure and bladder and skin cancer (Taiwan and Bangladesh),  petrochemical exposures, brain neoplasms and leukemia in Asia (Kaohsiung Medical University, Taiwan), and respiratory effects of paraquat exposure (Africa), as well as the role of rural agricultural and combustion air pollution studies on lung health (Africa). An exciting aspect of the international work is in methodological work, specifically, the development and adaptation of epidemiologic and laboratory techniques to the conditions of the industrializing world. The potential for effective interventions for disease prevention make this work particularly rewarding.

David has also been interested in studying the impact of exposures to various pollutants on health and the interactions between host factors (genetic and acquired susceptibility), and environmental exposures in producing acute and chronic diseases. That research is part of a field known as molecular epidemiology. He has been active in developing new methods for assessing health effects after exposure to pollutants and has a very active interest in international occupational and environmental health studies.

In collaboration with other investigators in his school, David has developed new biologic markers used in examination of pollutant-induced diseases such as lung cancer, esophageal cancer, bladder cancer, skin cancer and upper respiratory-tract inflammation. For example, he has led a large multidisciplinary study of the molecular and genetic analysis of lung cancer with specific attention towards genetic susceptibility to lung cancer and genetic-environmental interactions, using PCR-based methods to determine genetic traits and mutations, as well as molecular methods to detect DNA adducts.  David is also a study PI in an international consortium dedicated to lung cancer genetics and other epidemiologic aspects of lung cancer risk and survival. That work has been a model for examining gene-environmental interactions for cancer development.

David has also led a project that examines respiratory and cardiac effects of exposure to respiratory irritants contained in particulates from fossil-fuel boilers. That study involves an epidemiologic evaluation of the acute respiratory and cardiac effects of exposure as well as a detailed investigation including examination of molecular markers in nasal fluid and bronchoalveolar lavage fluid in exposed workers and controls, as well as continuous cardiac monitoring.

Since 1999, David has studied the molecular epidemiology of acute lung injury and Acute Respiratory Distress Syndrome (ARDS), a disorder that occurs after a toxic insult to the lung (e.g., sepsis, smoke inhalation). The syndrome has a high associated mortality, and little is known to prevent development. In that project he is in collaboration with MGH collaborators. They examine the role of genetic susceptibility in the development of ARDS after a toxic exposure, such as sepsis or smoke inhalation, as well as biomarkers of both risk and survival in this deadly syndrome.

David has led a 35-year longitudinal study of respiratory disease in cotton-textile workers in Shanghai, China. The objectives of this landmark study include determining the rate of loss in lung function among cotton dust-exposed workers at various levels of dust exposure and evaluating the relationship of exposure to gram-negative bacterial endotoxin and acute and chronic lung disease. They have expanded this study to include an assessment of relevant genetic factors, and an examination of reproductive effects of shift work and ergonomic factors at work as well as the exposures noted above. In the current cycle, they are also using high resolution chest CT scanning to assess the airway and parenchymal changes in the lung from dust and endotoxin exposures, and their interactions with smoking.

In Bangladesh, David has led studies of arsenic exposure an skin lesions, metabolic diseases and reproductive outcomes and initiated a birth cohort in which they assessed multiple metal (arsenic, lead and manganese) exposure on birth outcomes as well as childhood neurodevelopment. They completed the first GWAS study of the interaction between genetics and metal exposures on these outcomes.